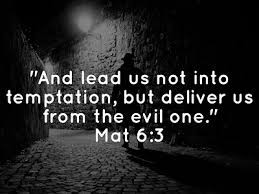 A recent book, The Marshmallow Test, by Walter Mischel, distils 40 years of research in the area of self-control.  The author’s now-iconic psychological experiment took young children and placed them in a room with a series of tempting treats such as marshmallows or cookies.  They were told that if they waited and resisted eating the tempting treat until the te

ster came back in, they would be rewarded with two treats rather than just one.  As you would expect, the results were mixed and many gave in to the temptation; some in seconds, others were more ingenious (One test had cookies with cream in the middle.  One boy opened up the cookies, licked the cream and carefully placed them back together.  When challenged he informed the tester he hadn’t touched the cookies!  “I don’t remember taking the test!”).
Temptation comes in all shape and sizes.  In today’s world that has never been truer.  We are hit by temptation from every angle – and what might seem to you quite innocent or not even a temptation can be to someone else an all-encompassing obsession.  What is clear is that temptation will come.  We haven’t the space to unpack the concept of “evil” today, but our prayer asks God not lead us into temptation or, as some translations write, “trials”.  The suggestion in the Lord’s Prayer that God might lead us into temptation seems to contradict the Letter of James 1:13  (Let no one say when he is tempted, “I am being tempted by God,” for God cannot be tempted with evil, and he himself tempts no one).  I don’t think there is a contradiction, rather that the prayer recognized that, in this world, temptation is inevitable because things are far from perfect and asks that when temptation comes that God be with us as we face it.
Alcoholic Anonymous (AA) was founded in 1935 by Bill Wilson (known as Bill W.).  Bill W. was an alcoholic who had ruined a promising career on Wall Street by his drinking.  He also failed to graduate from Law School because he was too drunk to pick up his diploma.  His drinking damaged his marriage, and he was hospitalized for alcoholism.  Through a church-led movement Bill W. managed to fight his temptation and remain sober.  What he began ended up being the 12 steps programme and it has helped many people with a variety of different addictions.  One of the most important aspects of the programme is the realization that you cannot do it yourself –  you need to attend meetings and you need the help of a Higher Power.
The same is true for us Christians and that is what the Church, at its best, has to offer.  Times of temptation highlight for us our need for community – to be part of a group of believers with whom we can share our lives, where we can give and receive encouragement and support and where we can develop and strengthen our faith.  On our own and isolated, without support from fellow believers, we are far more at risk of succumbing to temptation and then to continuing to indulge in it.  As we’ve said: none of us is free from temptation; it comes in all shapes and sizes and from all quarters!
So on this, the final day of our novena of prayer in which we have joined with countless others up and down the country praying for the re-evangelisation of this nation, we invite you to pray for God’s Church to be this loving and supporting safe place and to for us to know that God is always with us in our times of trials and our hours of need.  Today we also ask for your prayers for the newest community in our parish – that of Forge Wood (from amongst whose residents we have already had our first baptism and marriage enquiry) and for Forge Wood Primary School as it prepares for its first intake of children in September (in temporary accommodation).