In St Nicholas’ Church, there is a war memorial that commemorates 47 men from the parish who lost their lives in the war.  On closer examination, it’s not entirely obvious on what basis they were deemed to be ‘men of the parish’.  Some did indeed live locally, others were the children of local residents, but in some cases, it is difficult to determine the tenuous links which see them listed on our war memorial, and in fact, some are commemorated elsewhere as well as at Worth.  Nevertheless, they all made the ultimate sacrifice for their country and deserve to be remembered, local men or not. 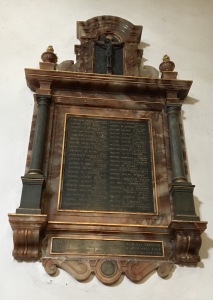 A great site for information is http://www.roll-of-honour.com/Sussex/Worth.html

Those shown on our memorial are listed below: