On the 18th May we were pleased to welcome Metropolitan Mor Eustathius Matta Roham, Archbishop of Jazirah & Euphrates of the Syrian Orthodox Church to St Nicholas to preach.  The text of his sermon is reproduced below (click here to download a PDF) and you can also see the Archbishop chanting the Lord’s Prayer in Aramaic – the language Jesus spoke – which he did at St Nicholas during the Eucharist that Sunday. 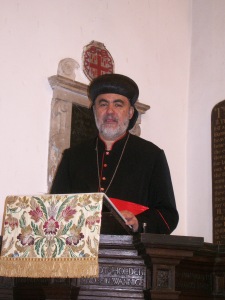 “Teacher, do you not care if we perish?”. And he awoke and rebuked the wind, and said to the sea, “Peace! Be still!”

I always tend to see the storm in the Sea of Galilee as a good example for the continuous confusion in my home country, Syria. I think you will agree with me that much like the disciples, the citizens of Syria are currently being struck by a great storm as they cross their own sea of life.Today, Syria is like a boat amidst the crashing waves of the sea.   No one so far has been able to stop the mad war in Syria. There is an urgent need for a miracle to happen in order to put an end to the miserable life of its people. I believe that the interference of God will save the people of Syria from this turmoil. This is similar to what Jesus did when He rescued His disciples and casted their fear.

The miracle of Jesus calming the storm is recorded in synoptic Gospels (Mark 4:35-41; Matthew 8:23-27; Luke 8:22-25). For each of their own specific reasons, the evangelists were interested in recording this miracle. Writing to those believers living under the tyrannical rule of the Roman Emperor Nero, St. Mark presents Christ as a servant to humanity, who is able to rescue those in their time of need.

Knowing the geographical situation of the Sea of Galilee or the Lake of Galilee is very helpful to refresh our minds about the setting of the story. On the northern end of the Lake, near the villages of Capernaum and Bethsaida in the territory of the Gennesaret, Jesus sat down by the lake and began to teach. At 15 miles in length, and 6 miles across at its widest point the lake itself is not all that large, though it is the largest freshwater lake in the region. It is located some 30 miles inland from and 682 feet below the Mediterranean Sea in the Jordan Great Rift Valley, through which the Jordan River flows. It is surrounded by mountains from which it collects surface runoff water, as well as water from underground springs. In this process, freshly melted snow from the peak of nearby Mount Hermon, via the Jordan River, descends a total of 10,000 vertical feet before it reaches its new home in the Lake of Galilee.

The reason the waters in the Lake of Galilee are made so turbulent is because winds regularly come down over the top of the Golan Heights just east of the lake. When they hit the lake, these cold winds collide with warm air trapped in the lower basin, turning its waters into a boiling caldron. Such conditions make the lake a very precarious place to be at the wrong time.

Certainly, Jesus and His disciples knew what kind of waters they were launching their boat out onto. And yet they had no concern about the possibility that the lake might erupt into a violent storm. There are a few possible explanations for their lack of concern. Perhaps they were simply traveling at the right time of the year. Perhaps the disciples simply felt that because they were traveling with Jesus all would be well. And yet, perhaps Jesus took them out on the lake to test their faith in a time of great stress.

The Gospel narrates that after a long day of ministry, Jesus wanted to cross the Sea of Galilee. While traveling He fell asleep as the disciples maneuvered through the waters. Yes, He is a perfect God, but He is still a perfect human. And according to His humanity, He needed some rest like the rest of us.

As the storm set in, a panic took hold of those in the boat, and presumably the other passengers in the other boats who joined Jesus in crossing the lake. Together they faced this great danger. As the water began to come over the sides of the boat the disciples attempted to save the boat, but eventually the water inside became so much that the boat started to sink. It was only at this time that they chose to awaken their Master. But why did they not wake Him up at the very beginning? Maybe they did not want to disturb His sleeping. It was only when they were desperate and began to face death, they came to Him asking His help, Saying: “Teacher, do you not care if we perish?” they cried. There was nothing they could do that would save them from the turbulent winds and the crashing waves. And although Jesus was deep asleep, at the same time He knew about the danger at hand.

By the fourth chapter of Mark’s Gospel, it would have been clear to the disciples that Jesus possessed a great power to heal the sick and drive out demons. But it is in this passage that they come to know his creative power covers not only the human beings, but also nature. The Bible emphasizes that Jesus is able to perform such a miracle, because He is the Creator. In his letter to the Colossians 1:16-17 St. Paul testifies, “for in him all things were created, in heaven and on earth, visible and invisible, whether thrones or dominions or principalities or authorities—all things were created through him and for him. He is before all things, and in him all things hold together.” This testimony to Christ’s central role in the act of creation is repeated throughout the Scriptures.

When Jesus rises from His sleep in the boat, He does not at first speak to the disciples, but to the winds and the waves, telling them to be quiet and to be still. By doing so, Jesus eliminates their reason to be afraid. They are merely left to wonder in astonishment, “Who then is this, that even wind and sea obey him?” Likewise Mark’s Gospel leaves the reader with the implicit conclusion that this master of theirs truly is the Master of all creation.

So what do we learn from Jesus’ calming of the storm? Behind every literal meaning of Jesus’ healings and miracles, stands a figurative meaning. The storms of life really are quite similar to the storm on the Sea of Galilee. People regularly endure the destructive power of tornadoes and hurricanes, they face life-storms such as sickness, war, unrest, economic crises, scandals, and all sorts of painful life experiences. As long as we live on Earth, as long as we live near the Sea of Galilee, we ought to continue to expect raging storms. For, as we are reminded in 1 Peter 5:8, “the devil prowls around like a roaring lion, seeking some one to devour.” We are continually surrounded by the powers of Satan.

Often our immediate response is that we are afraid of Satan’s attacks. But we must have a strong trust in the presence of God, turning to Him in search of His help. But what happens when God does not come to our rescue immediately? Do we not begin to question God?  “Are you there at all, don’t you care about us?” But we would be remiss to overlook God’s response: “Why are you afraid? Have you no faith?” Have you forgotten that the One who has power over life also has power over death?

What does this miracle mean for us who facing war in Syria? How should we react as believers in God when we see our homeland going through such dark times? We are praying for peace, and we believe that no resolution to the current situation will emerge except by peaceful dialogue. We cannot solve these troubles by making war and hoping that peace will follow. War will bring an even greater storm — it will break the boat and it will destroy the country and all its neighbors.

In many ways, we are like the disciples. We are terrified of the prospects of war, because it will mean our destruction and that of our neighbors. And still we believe that God and only God can prevent war and its destructive outcome. God can turn the hearts of people from hardness and selfishness to gentleness, peacefulness and creativity. Proverbs 21:1 reminds us that, “The king’s heart is a stream of water in the hand of the Lord; he turns it wherever he will.” And again Malachi 4:6 tells us that, “He will turn the hearts of the fathers to their children, and the hearts of children to their fathers”—that is, the heart of the king to the hearts of the population.