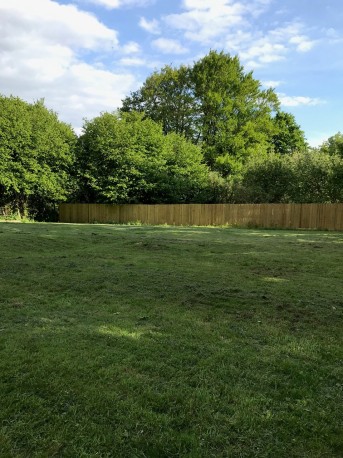 To most people, this photo is probably really rather dull; an empty field and a wooden fence. So what? However, there are those who remember that in 1994 the parish bought this land –  next to St Nicholas’ churchyard on the south and east side and once part of the Bishop’s Lodge kitchen garden – with a most generous donation from John Hillsley. This new fence replaces one put up at the time, as a condition of the purchase.

Since then, the land has remained unused and undeveloped and yet the original intention, that of creating a new addition to the churchyard for the interment of cremated remains, has never been lost nor forgotten. It was earlier this year that the old and rotten fence was replaced; likewise, the decrepit brick wall on the opposite side of the field has recently been spruced u 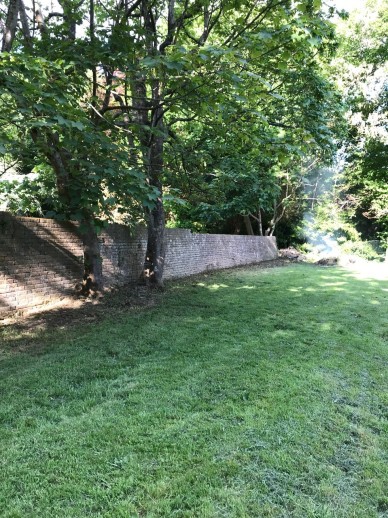 p and cleared of the ivy that had been damaging it including, in the winter storms, the ivy lifting off and bringing down two or three rows of loose bricks!

Along with some careful tree maintenance, preparations for the new Garden of Remembrance/Memorial Garden have been quietly progressing and, as we now have the support of both the local Crawley planners and the Diocesan authorities, we are all set to complete the garden. There will be a permeable resin bound path, 1.2 metres wide x 80 metres long, creating an enclosed space in the middle of the garden where unmarked interments will be and along the outer edge of the path, provision will be made for burial plots with granite tablets for other interments.  Some curved, two-seater oak benches will be placed along the path at suitable intervals and these, as well as a very few, carefully-selected mature trees will be available for people to purchase in memory of a loved one. Speak to Father Michael if you are interested in this – details are yet to be confirmed but the cost would probably be in the region of £400-£500.

A St Nicholas’ parishioner adds: “At the time of land purchase, there was a lot of parishioner participation even including clearing the ground and people also gave financially over some years for this project. In 2000, the Millennium Brass Band performed a concert on the designated land with money raised going into the pot as well. However, other things took priority and the land remained undeveloped. The Churchyard Maintenance team have been mowing the grass there in recent years and both they, and all who have contributed to this project in the past, will be very pleased to see this project coming to fruition.”